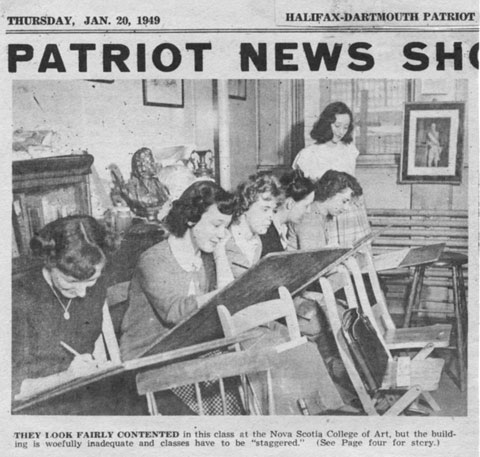 The flight of stairs led from Carleton Street to a level above the funeral home.

I thought of the bodies that must be laid out on the lower level as I and other students mingled with “full-timers” on our upward trend to the Nova Scotia College of Art in Halifax, Nova Scotia.

Snow’s Funeral Parlour, as we called the building, was full of spirits and the work of those designed to care for the nonliving. Brushing those thoughts aside, I anticipated the experience of learning. Art was to be a credited subject at the college and a beloved form of expression.

The room in which we met Daisy Baig, a congenial lady bound to boost our enthusiasm and ego, was filled with chairs and her narrow wooden desk. She smiled and said, “Welcome to the Nova Scotia College of Art. You will see plenty of wooden chairs. One on which you will sit. A second chair you will place before you, backwards. That’s right, the back of the chair goes before you. Your feet are to rest on the bottom rung, and then take one of these wooden boards I have. Place it to lean from your laps to the top of the chair. There! See how I have it? Your drawing paper will be thumb tacked to the board, four tacks, one on each corner of your paper—right? How does that feel? Good.”

She sat at a table facing the group of “Pre-Raphaelite” enthusiasts, while one of the students passed out our printing books, the first part of this admirable assembly’s “bibles” of learning.

The Friday afternoons and Saturday morning of Miss Baig’s teaching began, and to this day, almost 70 years later, I still see the dedication she instilled in her students who followed her instructions—not orders, but rather her suggestions. She never raised her voice nor was she outwardly displeased with our imperfections. These, she must have known, were to grow with correction that she spoke of—always—with a smile in her voice. We were a happy young group.

There were times when we moved our chairs about. Times when we giggled with joy as we greeted girls and boys who came from other sections and schools of Halifax. Printing was less than my cup of tea, but as time went by, it was an art form to be appreciated, I thought, and when it advanced we were blessed with other projects and forms of creative output.

When we were asked to do an “overall pattern”, we chose our own designs. Over and over the same drawing was made, showing we were capable of duplicating. I was pleased when Miss Baig said she liked my Norwegian couple with their costumes. I called it “Skol”.

I recall, at one point, a full-time student standing at one corner of the room. His name was Jack Gray. We were cautioned not to interrupt or disturb him; that he was an excellent, dedicated young man.

When Miss Baig told us to bring our watercolours and certain sizes of brush, I felt a sigh, a thrill through my whole being. She taught us to perfect a “wash”. Such skies! Such oceans! Such satisfaction! Whether we could or not afford a sable brush did not seem to matter. I opened the narrow tin boxes filled with colours that lifted my soul to the top of the trees. Flake white, lamp black, burnt umber, along with the forgotten names of blues, greens, reds, oranges and yellows. The paintings produced by the other students far surpassed mine, yet I felt the surge of excitement as we shared and complimented one another.

An interesting project was to choose a drawing or a picture we would like to reproduce. We were to draw the outline with a double line, cut with a careful blade between the double lines, remove the cutting and pin our stencil, as it was, to velvet that was tacked to a board. We then were instructed to take a dry stencil brush, dip it in oil colours of our choice, press it upon the “open” grooves of our stencil, then wait and wait and wait until eternity it seemed, for the “unveiling”, or to be exact, the unpinning of the stencil from the velvet when dry.

Ernie Wong, whose father (if I remember correctly) managed or owned Garden View Restaurant on Spring Garden Road, Halifax, leaned towards my cutting and softly said, “You must have infinite patience.”

I shall always treasure the comment of the young man. After that, some students referred to me as “Patience Potter”, though the majority continued to use a nickname given by them—”Potsy”.

When the unveiling took place, I was amazed and thrilled to view Ernie’s underwater scene. He had intricately woven on the loom of his stencil on velvet, starfish, seahorse and all that was difficult to do. He was the one with immeasurable and “infinite patience”. We were all enthralled. His colors were exquisite.

The time came when Lotta Dempsey, a Chatelaine Magazine editor, met with a group of girls in Halifax. She announced the magazine planned to form a teenage edition. She was very excited, as were we. We enjoyed a church service and breakfast at the Nova Scotian Hotel. We were told a prize of $25 was to be offered for a story entitled, “The Best Teenage Party I Ever Attended”.

I remember hearing that one should write of what one knows. I chose to write of a party at the Nova Scotia College of Art that I had attended one evening. I told it as it was.

Senior students had decorated the room above Snow’s Funeral Parlour. Pictures had been painted very much like “the Masters”, only theirs were done with a satirical twist that gave much amusement. Gainsborough’s “Blue Boy” was true to the original and framed nicely. The difference? He was standing in quicksand up to his knees. Sweet “Age of Innocence” was sitting on her usual spot, recopied exactly, however, wearing a maternity dress!

I won the prize for the story and reporters took photos and an announcement was made in the local Halifax Herald and Mail, which was on the same street as Snow’s. The news bulletin stated my story about the Nova Scotia College of Art would be published in Chatelaine in the near future. My teachers and Miss Baig were happy and awaited with anticipation. A letter from Miss Dempsey, however, informed me that the teenage council project was dropped and my story was never printed.

I recall the fun of doing life drawings and the students posing like statues one at a time. I thought that was neat, following the example of Joe and Bud and others in our class.

The day I was asked to sit, I remember wearing my kilt, the pleated tartan skirt with a large pin and fringe at the front. I wore penny loafers and plain socks. (How I longed for the diamond socks in school colors that two students—”the twins”—wore. Their grandmother made them socks and matching sweaters in school colours.)

I was looking forward to seeing some of the drawings of myself. I must admit these young artists were really great!

Daisy shook her head. “That is not nice,” she said, suppressing a laugh as she viewed the results of Bud’s (or was it Joe’s) rendition of “Patience Potter”.

He had done of likeness of me from head to toe, but under my right foot he had drawn a rabbit being squashed by me.

One of his buddies had made another change that caused both me and Daisy Baig to blush. “Now that is really not nice,” she said. He had depicted me in a rather naughty way, a hand between my legs…

When we graduated, I recall people connected with the Nova Scotia College of Art coming to hand out diplomas, and to some, not me, full-time scholarships.

Professor Harvey, of Dalhousie University, was present. Others elude me, but the day was pleasant and the sun shone through the windows on that floor above Snow’s. I was heartbroken to leave the happy environment that I had been privileged to inhabit. I wished I had been awarded full-time status, though I would have found it difficult due to financial circumstances at home during that time.

Daisy Baig may have sensed this. She said, “Margaret, I was going to award you a scholarship but I thought you would not want one.”

“That’s alright,” was all I managed to say. My Daddy had always called me “Little Rembrandt”, even though I knew I was not worthy of such a name! I would have to decide what to do with my life.

I continued to take some night courses. Mr. Donald Mackay gave excellence lessons and later I was happy to take some lessons under the teaching of William deGarthe. I was surprised he recognized me from earlier years when in Grade 7 or 8, the career counselor had me see him. She felt I leaned towards art. When I showed him a very meager chalk drawing of a dog that I made as a sample of my work, he made a great fuss over it. I thought, “He is like my Daddy. He wants me to feel good about my efforts.”

During the course with Mr. deGarthe, he expressed a wish he might have his hand-written notes typed. I offered to do them.

I fear I had much struggle reading the Great Man’s handwriting. After I did my best, I returned them. Mr. deGarthe looked at what I typed, gave an impish smile and said to me, “I believe you had trouble reading my writing. Well, let’s not worry about my notes anymore.”

Were he alive today, I would say, “Thank you for your smile and your encouragement … and for your paintings that grace the galleries … for your Peggy’s Cove carvings in rock … and for sending a little girl over the rainbow when you complimented her humble, less-than-perfect dog, done on a piece of scribbler paper …”

Margaret-Louise Rempel (nee Potter), age 84, wrote down her remembrances of attending the Nova Scotia College of Art as a part-time student in the 1940s. Margaret grew up in Halifax and still misses the fog and the salt air of the east coast. She married Gordon Rempel (1931-2003), a captain in the Canadian Armed Forces, and had five children, Diana, Edward (deceased), Laura, Emily and Victoria Anne. A resident of Sidney, B.C., she still likes to draw and paint watercolors, just as Miss Baig taught her so many years ago.