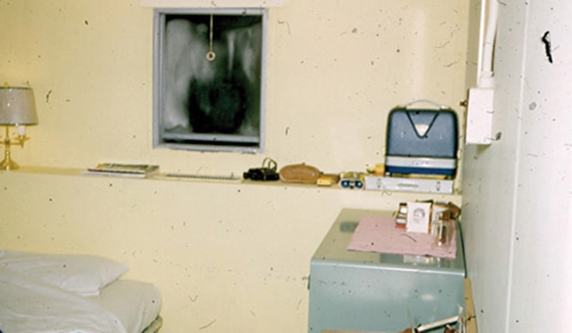 Station: A glimpse of Michael McCormack’s grandfather’s station as a radio operator during the Cold War

Imagine being transported to a time of war, where the act of listening to radio signals was your responsibility because lives were at stake. It’s this kind of experience that NSCAD grad student Michael McCormack wants to re-create using sound and media.
Granted $17,500 from SSHRC (Social Sciences and Humanities Research Council) for his research project titled Station, Michael hopes his work will connect the past and the present for viewers.

Inspired by his grandfather B.W. Cosman’s experience as a radio operator on the DEW (Distant Early Warning) line project during the Cold War; Michael grew up hearing stories of his grandfather on the cold Alaskan/Yukon border listening for any warnings of a Soviet attack.

“His job was to sit and listen, be a part of this network of communication, I kind of saw him as this nerve ending for the larger network,” he said.

His grandfather’s stories opened up a lot of ideas for Michael, ideas about the importance of inter-generational mentorship when it comes to learning skill sets, communications and communicative media. All of these ideas will be reflected in his work.

As part of his MFA research Michael has been reaching out to radio clubs across the Maritimes, including the Sydney Amateur Radio Club and the Society of Newfoundland Radio Amateurs.  He’s engaging with these groups in projects to translate media as we know it into Morse code.

“I’m interested in the primary, the first-hand, hands-on experiential experience. So to me visiting is a way I can understand information in ways that is not just probing something.  This process breaks down the objectification of who they (the club members) really are as people,” he said.

Taking time to visit, learn and talk with these groups has provided Michael with a greater understanding of how and why this antiquated technology is still being used.

“These groups meet every week, most between the ages of 50 and 90, people that for various reasons are using short wave radio and working with that media. Some of them are old air force pilots, some of them were navy engineers and just for hobby will go look for satellites using radio signals, there’s all sorts of back stories,” said Michael.

Studying to be an amateur radio operator himself, Michael wanted to learn about this skill while there was still people around who knew how to do it.

Comparing the shortwave radio to an old-timey version of Facebook, he pulled out his grandfather’s QSL cards, a postcard-like correspondence sent by mail to confirm radio communication between amateur radio stations.

“As a democratic medium, shortwave radio exercises two-way communication even though AM and FM are usually just a one-way signal,” he said.

Preparing for his MFA show in March, Michael hopes to give viewers an experience they won’t forget.