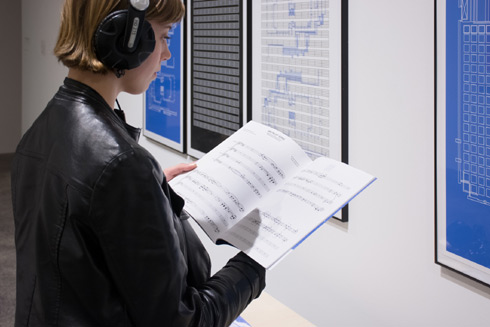 However pervasive this turn of phrase, Goethe’s original words were something along the lines of “architecture is frozen music,” but over the last 200-odd years this has expanded that to the line we now know today, and we happily accept its new clothes.

In his series of art works Brutalist Song, Halifax-based artist and musician Will Robinson (BFA 2005) explores the connection between architecture and music by converting the very building plans of Brutalist buildings into musical scores which, perhaps surprisingly, create haunting and beautiful soundscapes.

Brutalism is a mid-20th century international architectural style known for great expanses of concrete that commonly came to house government offices, stadiums, low-income housing, and universities, and has a visual quality often employed in certain forms of cinema. Robinson remembers his earliest encounters with Brutalist buildings in childhood from his summer camp days at Trent University in Peterborough and the ominous other-worldly structures in early Dr. Who episodes. The alien quality of the music Robinson creates is fitting to the buildings that they are born out of, buildings at home both in small Canadian towns and alternate dimensions

The first installment of Brutalist Song was featured in the 2014 AGNS exhibition Rock Show. Visitors could view the architectural plans of the Confederation Centre for the Arts, specifically of its art gallery and its theatre, look at the music scores, and listen to the strange and beautiful music through two sets of headphones. For his upcoming second installment, Brutalist Song II, Robinson has organized a performance to accompany the Halifax-specific installation. Halifax has several Brutalist buildings: Fenwick Tower, the Scotiabank Centre, and the Aliant Tower, for example, but following his 2013 residency at Dalhousie’s Killam Library Robinson has decided to turn his gaze to the university library, creating a score of its building plan and hosting the performance in its atrium.

The show, which takes place this Sunday, May 8th, will consist of a performance every hour between 2 and 5 pm. An eight-piece brass piece band and an organist will perform a score derived from the architectural plans of the building, followed by a collaboratoring composer’s alternative version of the same piece. Following this procession-style performance Robinson will invite the viewers to disperse throughout the atrium to activate the space, experiencing banners, sculptural installations, and singing stones.

“[The Killam] has a kind of gloomy feeling to it” says Robinson, a mood he hopes to capture in this work. He can’t help but draw comparisons to the new Halifax Central Library, as most Haligonians do when turning our gaze to older buildings in our city. The critical and public success of the new library seems to be an encouragement to the seemingly endless developments cropping up around the city, but Robinson cautions us when it comes to the demolition of these old buildings, especially ones done in now unpopular styles like Brutalism.

As Halifax undergoes massive changes to its architectural landscape Robinson argues that it is important for Haligonians to take notice of the buildings around us:

“I just hope [the show] sparks discussions about how we experience buildings through our senses, and kind of like on a socio-political or historic level becomes so prominent in our discussions… especially in Halifax when we’re just tearing down old buildings like we are, it’s really important to consider why and how and when things were built and how they’re standing up. Hopefully it brings more of an awareness to the structures we inhabit.”

In an episode called Hard to Love a Brute the design podcast 99percent Invisible describes the predicament of Brutalism as one of being in the doldrums: not old enough to be classic and not young enough to be contemporary. Many of us has haven’t yet learned to appreciate these buildings and Robinson cautions that our dislike of them may be pre-emptive.

Another paraphrasing of Goethe’s thoughts on music and architecture can be seen in Swiss architect le Corbusier’s (often credited as the father of Brutalism) Modulator: a two volume book articulating a system of proportions for architecture. In the second volume of the book Greek architect and music theorist Iannis Xenakis paraphrases Goethe, saying “Architecture is music become stone”. Robinson’s work has more than once been contextualized with a quote from Goethe on this matter, and I won’t disregard such a lovely and applicable analogy, but I would take it a step farther and say that Robinson’s work acts as does the misquote – it extracts the music from the stone, makes liquid the architecture.

Rather than use music to alter an atmosphere in a space (the gloominess of the Killam, as he puts it) Robinson intends to show us the voice of the building, to allow the Killam to speak (or sing) for itself.

Brutalist Song II runs at the Killam Memorial Library, Sunday, May 8th, from 2 pm to 5 pm.