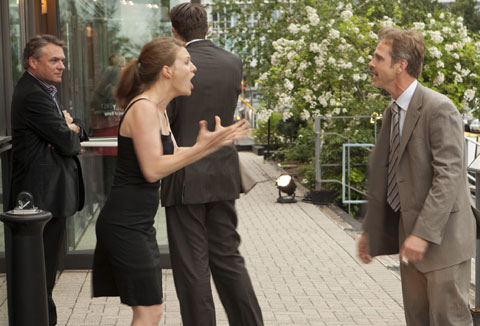 Seems a lot of NSCAD folks are headed to North Adams, Massachusetts at the end of May. Why you ask?

It’s because of Oh, Canada, the largest survey of Canadian art in decades. The exhibition will run at MASS MoCA (the Massachusetts Museum of Contemporary Art) from May 27, 2012 to April 1, 2013, with an opening reception and dance party on Saturday, May 26.

To find out more about the show, we gave MASS MoCA curator Denise Markonish a call.

I started to notice that more and more of the artists that I liked personally were Canadian. Artists like Janet Cardiff, Marcel Dzama, Rodney Graham. They seemed to be making the kind of work I gravitated to, kind of humorous, surreal, perhaps a little uncanny. I thought, huh? I wonder what else is going on up there.

And then I started to dig a little deeper. The last big exhibition of Canadian art happened in the late 1980s (organized Diana Nemiroff at the National Gallery of Canada in 1989) so I was thinking maybe this would be a good time to take another survey.

It’s the kind of institution that takes those leaps. I’ve been very well  supported. We’ll have 20,000 square feet for this show and I’m very excited.

Plus, it’s easy to get here—so come on down!

How did you get started?

I started to look online and at magazines like Canadian Art and Border Crossings. And then I started connecting with curators. I was building a list that at one point had 800 names on it.

Then, about four years ago, I made my first trip to do studio visits. I think I visited about 400 studios and covered a lot of ground. I’ve seen a lot of Canada.

In assembling the show, were you on the lookout for anything in particular?

No, this is not a show about ‘x.’ But even so, I found I was looking a lot at landscapes—landscapes seem to be ever present, even in the cities. I was also surprised that a lot of artists were using craft methods and materials so that stood out for me. Perhaps if I was looking for something it was for conceptualism and how it might have evolved over the years.

The show is full of humor. Perhaps that’s not surprising given that Canada is a net exporter of comedians. It’s not a ‘ha, ha’ humor though. It’s quite dry and absurd. I find Canadians have a willingness to poke fun at themselves.

The First Nations art being made in Canada is rather remarkable. First Nations artists in particular seem to be dealing with questions of identity. I can think of Joseph Tisiga (a NSCAD student from Whitehorse in the Foundation program), Rebecca Belmore, Kent Monkman and the Inuit artists, Annie Pootoogook and Shuvinai Ashoona. And then there’s someone like Mario Doucette, an Acadian artist from Moncton. Identity is something he’s exploring as well.

In looking at the artists who’ll be represented at the exhibition, I’m struck by how many have NSCAD connections.

Yes, me too. Even before this project, of course I had heard about NSCAD. But originally it was through the lens of the Americans who went there, John Baldessari and Vito Acconci and Lawrence Weiner. I didn’t really know much else.

But then I started researching and found out about Garry Neill Kennedy and Jerry Ferguson and David Askevold, both of whom were from the U.S. but stayed.

You can see the legacy that’s been built there. It’s such a huge force in the Canadian art world. I think there are so few institutions that foster that kind of experimentation and learning and legacy. It’s really remarkable, both for its heyday and continuing to now.

It’s an art college unlike any other, there’s something about NSCAD that was never your average art college. It just seems to be a breeding ground for new ideas. And it’s really important that that doesn’t slip away.

When were you in Halifax?

I was there in August 2010. Garry Neill Kennedy was so gracious and brought me here and there. I can’t wait to get my hands on his book (The Last Art College published by MIT Press.)

So, you’re still an American, even after all this?