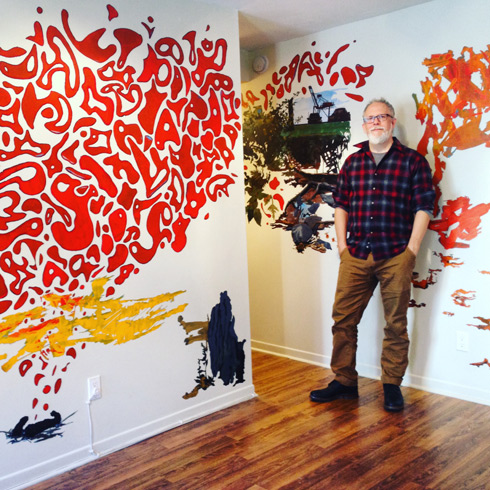 Paintings from the perspective of a dog’s nose

When NSCAD professor Mathew Reichertz was a dog owner, he and constant companion Georgia were frequent visitors to Point Pleasant Park. They were there twice a day, every day for more than a decade.

Just how often he was there in the park with Georgia, an Australian cattle dog who needed plenty of exercise, occurred to him one day while at the airport. He picked up a pamphlet about Point Pleasant Park – and noticed it was him in the photo on the cover, going for a run with Georgia bounding by his side.

Percolating through those daily rambles, an idea occurred to him: as a painter, how could he capture Georgia’s experience of the park, an experience she realized largely through her sensitive, highly attuned nose? How could he visually represent a sense as elusive as smell?

“To tell you the truth, I think the idea was born of annoyance,” he says. “She’d want to sniff and I’d want to get going.”

Mathew explored the idea, dubbed Dog Park, further through a residency at Point Pleasant Park in 2012. But then he put it aside to develop another suite of work – Garbage – in which he transformed the walls of Saint Mary’s University Art Gallery into the pages of a life-size comic book. There’s also a graphic novel of the same name published earlier this year by Conundrum Press.

With Garbage put out—so to speak—he finally had the time to return to Dog Park with a show last month at Hermes Gallery.

The gallery is on the small side, but Dog Park is designed to be presented on a grand scale, filling the walls from floor to ceiling. The paintings are done on sheets of see-through plastic, which were then cut out and applied to the walls. Different smells are depicted differently: some are representational, others more abstract, others cartoonish – like the yellow, cloud-like mist emanating from a pile of dog turds. On another wall, the image of a log emerges in a series of lines, as if through Georgia’s snuffling the object takes shape and becomes realized.

The smells are all around: from an invigorating whiff of the ocean to the dank odor of rotting vegetation. And perhaps from Georgia’s perspective: the identifying smell of another dog’s butt or the scent of an animal which passed by a day ago. It’s estimated that a dog’s sense of smell is between 1,000 and 10,000 times more acute than a human’s.

He explains: “I did research about how smells move over uneven terrain, how a dog’s nose works and how they behave when they are tracking a smell. The more I sought to understand a dog’s sense of smell, the more I realized that their olfactory experience creates a kind of architecture that they inhabit and move through.”