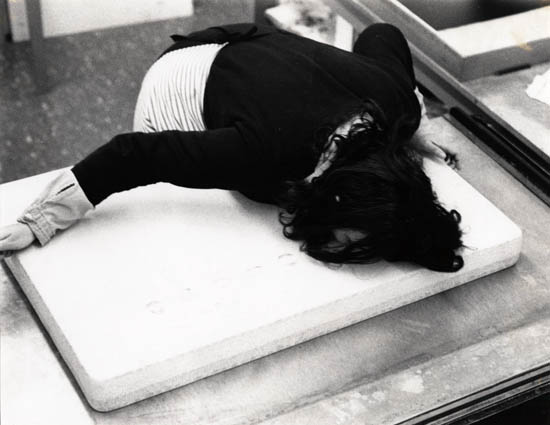 The images associated with the Lithography Workshop are now part of NSCAD legend.

Canadian artist Joyce Wieland applying lipstick and then bending over the lithography stone again and again to kiss out the syllables to O Canada. Former NSCAD president Garry Neill Kennedy writing out John Baldessari’s I Will Not Make Any More Boring Art numerous times like a schoolkid on detention. American artist Vito Acconci biting the parts of his body he could reach with his teeth and making prints to record the gruesome marks.

Those are just some of the reasons of why NSCAD, a small art school on the east coast of Canada, came into international prominence in the 1970s. The who’s who of the art world were suddenly curious about what was going on in Halifax.

“I like to picture them having a laugh,” says Melanie Colosimo, director of the Anna Leonowens Gallery. “Garry (Neill Kennedy) and Jerry Ferguson were having fun, and put together a very smart program. The premise was to see what kind of work could be made when a master printer was brought together with a conceptual artist, who traditionally did not make prints or think of their work in that format. It was an experiment that had incredible outcomes, beyond what they had imagined.”

And now the stars have aligned to make it possible for NSCAD to revisit that part of its history and revive the concept. Eight visiting artists will come to NSCAD University for a up to two weeks to work with Tamarind-certified master printer Jill Graham and create original prints as part of the NSCAD Lithography Workshop: Contemporary Editions.

With the exception of Walker, whose current work riffs off lithographic propaganda posters, none of the artists considers printmaking as a primary part of their practice.

“The timing was perfect,” says Colosimo. “NSCAD has a master printer in Jill Graham. The faculty in printmaking, Ericka Walker and Mark Bovey, have a lithography focus. And then there was this opportunity with the Canada Council.”

That opportunity was the Canada Council for the Arts’ New Chapter funding – a one-time funding opportunity for a “dream project,” says Colosimo. With the support of Jill Graham and Carla Taunton, she applied and was successful in receiving $285,000. The hope is that sales of print suites will continue to sustain the program beyond 2019.

“One of the exciting parts of this project are the opportunities for students to interact and learn from these artists while they’re here,” she says. “Like Garry pointed out in the ’70s there’s an educational dimension to the lithography workshop that is not available in usual media-focus orientation of art school curriculum.”

NSCAD Lithography Workshop: Contemporary Editions is one of 200 exceptional projects funded through the Canada Council for the Arts’ New Chapter initiative. With this $35-million initiative, the Council supports the creation and sharing of the arts in communities across Canada.