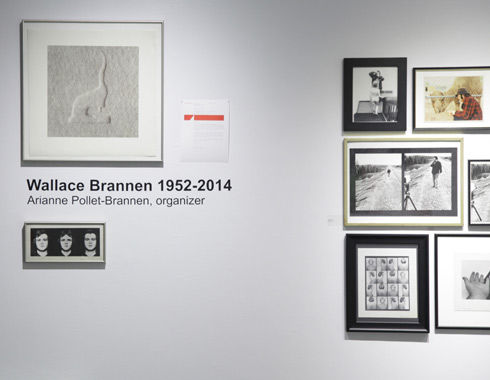 A baseball caught in a glove, a list of significant events from 1974, a bat in mid-swing, a mustard-drizzled hot dog, cheeks smeared with black grease paint: for artist Wallie Brannen there was a time when the baseball diamond of his sons’ little league team became his studio.

The resulting photographic banners are some of the works currently on display at the Anna Leonowens gallery in Wallace Brannen 1952-2014,  a retrospective and tribute to Wallie organized by his wife Arianne Pollet-Brannen. The exhibition also features works from Wallie’s time as master printer in NSCAD’s lithography workshop, as well as his years instructing in the Cape Dorset studios on Baffin Island, Nunavut.

In addition to the prints and mixed media works displayed in the main gallery space, visitors who venture around the corner can see three media works installed in the adjacent alcove. In the first of these three works Wallie discusses the history of the lithography workshop in a recording of a presentation given to students at the Anna Leonowens Gallery. Illustrating his lecture with the prints themselves, Wallie’s presentation speaks to NSCAD’s significant role in the conceptual art movement of the 1970s, while his skillful handling of the prints and the personal anecdotes that punctuate his presentation demonstrate his sensitivity to material and his invaluable institutional knowledge.

Alongside a monitor displaying a slideshow of photographs from his ten years in Cape Dorset, Suzanne Caines’ audio and text piece Crystal Crescent pays touching tribute to her friend and mentor. The carefully selected works show Wallie to have been a skilled printmaker, a gifted arts student, dedicated father, valued mentor, and an expert in his field – all qualities that show what a tremendous resource he truly was and what a terrible loss his passing is for this community.

The show has given community members the opportunity to gather just over a year since his sudden disappearance and passing- to celebrate Wallie’s life and the work produced in his more than 40 years of making.

“He would always work for the object”, says Pollet-Brannen of her late husband, remarking on his meticulous eye and incredible attention to detail in whatever field he found himself working. It seems altogether fitting that her tribute to him should be an exhibition of such objects – whether a child’s mobile, an artist’s chop, or a print of an elephant in an Arctic landscape.