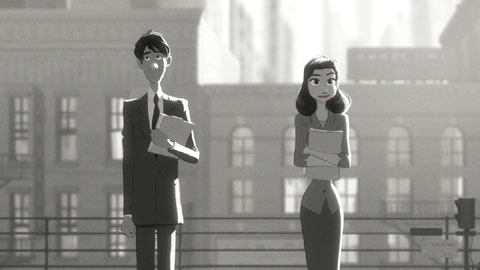 Respect for the hand-drawn line

John Kahrs’s animated short Paperman has all the hallmarks of a Disney production: appealing characters, attention to detail, a charming story and a dash of magic. And yet somehow it all seems fresh.

“I think what Disney has always done so well is present the ‘plausible impossible.’ It’s impossible and yet it’s believable anyway,” he says, on the phone from Los Angeles, still basking in the glow of an Oscar nomination. “I think Paperman continues that tradition, but in the way it’s told, is new again.”

Paperman, which he wrote and directed (and even provided the coughs and exhales of the main character), is up for a best animated short at the 85th annual Academy Awards ceremony on February 24.

What’s new about Paperman is actually old—it’s animation that respects the hand of the artist, or as John says “the expressive line.” The artists working on the seven-minute film developed new technology which combines computer-generated art with hand-drawn but paperless 2D animation—the drawings were made on digital tablets.

“There’s a lot of soul in the eyes of our characters and that’s because of the decisions that the artist made. The eyes are really only black discs, but they’re drawn so carefully and cleverly that the characters look alive. You’re drawn to them. And I think that’s the difference. As much as I love computer animation, I still feel there’s a place for the hand of the artist.”

Spoken like a true art school grad. From the Hudson Valley in New York state, John did his foundation year at the Pratt Institute in Brooklyn and then transferred to NSCAD. “I needed to go somewhere where I couldn’t go home to do my laundry.”

Plus, he continues, “I was intrigued by the edge of the world idea. It was the right place for me at that time.”

At NSCAD, John was free to explore and experiment. “What I loved the most is that you could jump around from the dark room to the easel to the metal shop to the computer lab … I was a painting major but I really was a jack of all trades, master of none.”

But two minutes was all it took for him to find his focus: animation. That’s the length of Luxo Jr., a computer-animated short film produced by Pixar and directed by John Lasseter. He saw the short film at Wormwood’s Dog and Monkey Cinema, Halifax’s now long-departed and lamented repertory cinema.

“Wormwood’s introduced me to independent cinema and all the classics. It was really like auxiliary film school training.”

After Luxo Jr., John sought out the computer lab at NSCAD and shifted his entire curriculum to focus on animation and filmmaking. Through his classes and what he learned through trial and error, the kid who grew up making flip books put together a demo reel. After graduation in 1990, it was enough to get him a job at Blue Sky Studios in New York, which has since become known for the Ice Age franchise.

After a few years at Blue Sky, he went to Pixar (“After Toy Story came out, I couldn’t stand it, I had to go there”) where he’s worked on every Pixar feature in recent years, including A Bug’s Life, Toy Story 2, Monsters, Inc., The Incredibles and Ratatouille. Then, in 2007, just a year after Disney’s purchase of Pixar, he moved to Los Angeles to become a supervising animator at Disney. Before getting the green-light to work to lead his own project, he worked on Tangled, the Rapunzel tale.

“I always had this short film at the back of my mind and, for one reason or another, at Pixar it didn’t happen. Then, after Tangled, I pitched it again as a gap filler and go the OK.” John Lasseter, whose film Luxo Jr. John so admired as a student, served as executive producer on the project.

Paperman is inspired by John’s days at Blue Sky, feeling lonely and overwhelmed in a city of millions.

“You’d make eye contact with someone and in that moment you imagine a life together. And then, the eyes break and they’re gone forever. In the big city, everyone is looking for a connection, for meaning and love. How would the fates conspire to bring two people together?”

Paperman has a nostalgic look, taking place in the “canyonlike spaces between skyscrapers” of a vaguely 1950s New York City. The film unspools without dialogue or colour—with the exception of a red lipstick mark—telling the story of downtown office worker who falls in love at first sight with a young woman and then immediately loses her. But then, catching sight of her in the office tower across the street, he endeavors to catch her attention with a fleet of paper airplanes.

“I am such a big fan of an art school education. Every day, I am immersed in the kind of decision making that we learned about at art college, about colour theory and composition and presenting ideas visually. NSCAD gives you a foundation with the basics and lets you specialize as you go.”