When the Governor General’s Awards in Visual and Media Arts were announced, it came as a relief to Pamela Ritchie, who had been holding on to the news in secret for months.

An influential teacher and mentor at NSCAD, Pamela Ritchie has been recognized for her artistic work with the 2017 Saidye Bronfman Award, Canada’s highest award for fine craft.

Prof. Ritchie, both an alumna of NSCAD and a long-time professor, is the recipient of the Saidye Bronfman Award, the one Governor General’s Award specifically for fine craft. This year, the award marks its 40th anniversary; fellow NSCAD recipients include Paul McClure, Sandra Brownlee, Greg Payce, Charles Lewton Brain, Kye-Yeon Son and Walter Ostrom.

“My first reaction was to sit down and take a deep breath,” says Prof. Ritchie, who heard back in November. “You always wonder how people think about the work you do, so this is a strong acknowledgment from my peers.”

From Amherst, Nova Scotia, she graduated with a BFA from NSCAD in 1975 and a MFA in 1982, followed by postgraduate work in Norway. For the past 30 years, she has taught at NSCAD, and, with Prof. Kye-Yeon Son, built a Jewellery Design and Metalsmithing Department known for its rigor and creativity.

Students have described her teaching as transformative. According to Paul McClure (BFA 1989): “My experience as a student of Pamela Ritchie was integral to my development as an artist.  Her extensive knowledge of art and jewellery and her ability to challenge and encourage my work were important resources and inspirations throughout my education. Pamela’s commitment to the field and influence as both an educator and an artist have continued to command my respect and are invaluable assets to the art jewellery community in Canada.”

“I have marvelous students who challenge me as much as I challenge them,” responds Prof. Ritchie. “I feel lucky to have a career in such a supportive and artistically creative environment.” 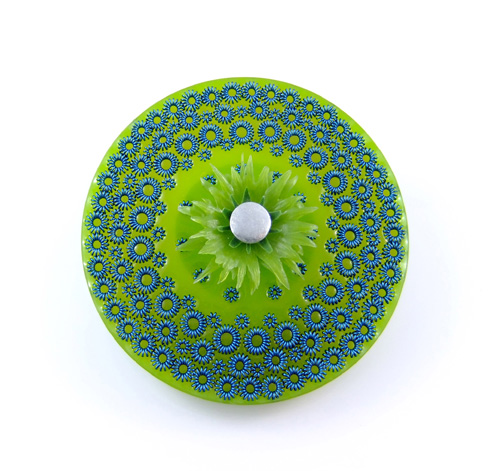 Throughout her teaching career, she has maintained a studio practice, seamlessly combining “centuries-old techniques with cutting-edge technology to create works of exquisite beauty laden with meaning,” says Susan Hanrahan, executive director of the Nova Scotia Designer Crafts Council and her nominator for the Saidye Bronfman Award. Prof. Ritchie’s work is represented by Montreal’s Galerie Noel Guyomarc’h, which is presenting a retrospective of her work, A Quiet Unfolding of Ideas, March 31 to April 29.

Made of a wide variety of materials, her work is beautiful and wearable, but also has something to say. For the past 10 years or so, she has been using jewellery to communicate her thoughts about scientists and how their unsung work has had a huge impact on our lives—scientists such as Joseph Lister (1827-1912), whose name has been given to a mouthwash. More importantly, he introduced new principles of cleanliness that transformed surgical practice in the late 1800s. Until Lister introduced a sterile surgery, a patient could undergo a procedure successfully only to die from a postoperative infection.

“I use jewellery as a way of developing ideas. There are political undertones, but they’re not strong. For the viewer, it’s subjective.”

Prof. Ritchie’s work in a group exhibition of 2017 Governor General’s Awards in Visual and Media Arts Laureates will be on view at the Winnipeg Art Gallery from April 8 to September 4.