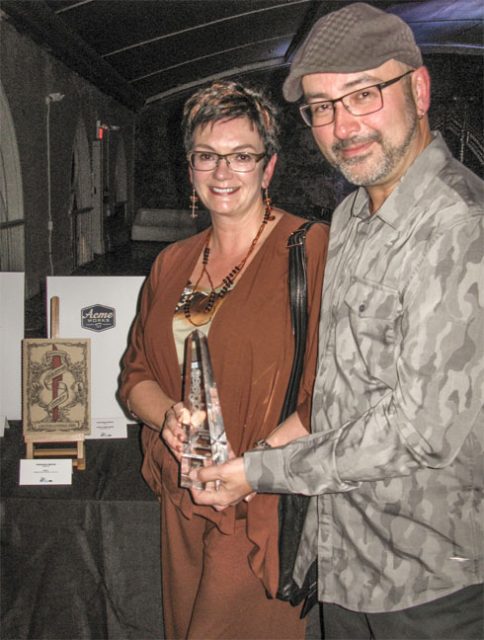 Kelly and Larry Burke of Burke & Burke Design with one of the Redgees they received this year.

“Mom and Pop” barely scratches the surface on all that is Burke & Burke Design.  For nearly 30 years the Halifax based design firm, headed by Kelly & Larry Burke, has been designing award-winning work for clients all over North America.

NSCAD alumni Kelly and Larry Burke, along with their team of NSCAD graduates, at Burke & Burke Design, recently took home top honours for the Atlantic Region at this year’s Canadian Regional Design Awards (CRDA).  The awards, also known as the Redgees, celebrate the best in Canadian design.

This year’s CRDA awards saw over 470 entries from across Canada. The pieces were divided regionally and evaluated by a panel of 16 judges using a point system based on: originality, creativity, craftsmanship, effectiveness, and overall experience.

Burke & Burke took home the award for best web design for their work for Millen Farms of Great Village, Nova Scotia and best logo design for Acme Works in Toronto.

“We like the Redgee Awards because they’re regional and it puts us on a fair playing field so we’re not competing with Toronto firms that have ten times the budget,” said Larry.  “You’re competing in your region, which is really the place that’s important to us.

Awards are not everything to Burke & Burke; they are very selective in which competitions they choose to take part.

“When you’re a small firm, you don’t have the time to toot your own horn a lot,” said Larry.  “We’re not like the big agencies that are doing all of this external stuff, and they’re in the paper all of the time. As a small firm you don’t have the ability to do that because you’re too busy working.  We don’t have somebody dedicated to tweeting every day and putting stuff out there so you really have to rely on the work that you do to kind of speak for your firm.”

What sets their boutique design firm apart is their creative, no-nonsense, all-hands-on deck approach to working with clients.

Burke & Burke really embrace the idea of success through teamwork. “In this office we really are a team, there’s no egos.  We all have our own strengths and they’re all different.  And everyone throws that in there so that we end up with work that reflects that so it gets the best of all input.  It’s not just one person’s idea,” said Larry. “We all share the success of it. If something’s a success it’s because we’ve all put a part into it and that shows. That’s what differentiates us from others.”

The key to Burke & Burke’s success is quality and integrity. “We will only do quality work ¬— nothing leaves the shop unless we’re 100 per cent satisfied with it and that can’t be said for every firm,” said Larry. “We would fire a client or not take on a project if we can’t do it properly and I don’t think everybody can say that.”

Kelly agrees 100 per cent with her partner: “Because we believe that everything out there has our name on it and if it has our name on it, it has to be of a certain quality, we’re not going to compromise on that. We’ve actually fired clients and said that maybe you should think about working with somebody else.”

“A testament to that is if you look at our portfolio there is no house style,” said Larry.  “It reflects each client’s situation because that’s what a good communications designer should do.  If you look at a portfolio and everything has the same look then who are you really designing for?”

When discussing the joys and challenges of owning your own business Larry was quick to comment that “The worst day as an entrepreneur is still better than the best day as an employee.”  Kelly believes that “anything but the creative part is the challenging part.”

However both of them enjoy the freedom of owning their own business.  It gives them time to do volunteer work.

Both are very involved in their community.  Larry is currently the president for the Atlantic Chapter of the Graphic Designers of Canada (GDC) and Kelly is currently the academic chair of the Atlantic Chapter of the GDC and does design work for the Quinpool Road Merchants Association.  “We think it’s important to give back to the community in any way that you can,” said Kelly.