Portrait of an Artist: Suzanne Gauthier

Artist Suzanne Gauthier isn’t crazy about seeing herself on screen, big or little. But once she agreed to be the subject of a documentary, she found herself looking past her own image and being captivated by what the filmmaker discovered.

“I think it’s hard to make a good film about an artist,” says Gauthier, over the phone. She’s just come in after picking gladioli from the garden. “But I’ve got to say it’s actually a good film and not because it’s about me,” she continues with a laugh.

The documentary, Suzanne Gauthier: one thing leads to another, comes to the big screen as part of FIN: Atlantic International Film Festival. It was produced by one of Gauthier’s former NSCAD students, Louise Waters (BFA 1992), and directed by Ariella Pahlke.

Suzanne Gauthier: one thing leads to another is a portrait of the artist, with a focus on her process and sources of inspiration for her art. Now retired as a professor after 24 years in the painting department at NSCAD University, Gauthier divides her time between her cottage in Fox River, near Parrsboro, and her Sleeping Dog Studio on Cornwallis Street in Halifax. Her artistic practice over four decades combines ceramics, drawing, printmaking and collage.

Likewise, the film goes back and forth between locations and artistic media, and also in time. Her anecdotes and musings, as well as music by Ostrea Lake, thread through the poetic narrative, linking everything together.

“One thing led to another,” says Pahlke, echoing the title of the film. “It was fluid … you could seeing how works created in the past are connected to the present and how her inspiration carries through.”

Gauthier’s artistic process influenced Pahlke’s creative approach to the film, which delves into sketchbooks, journals and boxes packed with artworks. It follows Gauthier into her garden with her dog Lucky beside her as she shares thoughts on art making, nature and life in the country. 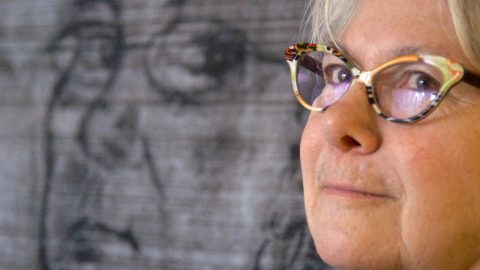