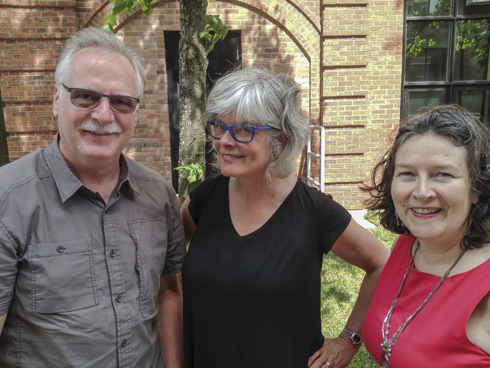 Support for research on the Halifax Explosion

In the almost 100 years since the Halifax Explosion, it’s the stories that survive and have the power to move us still: about the force of the blast and the tsunami it caused, followed by a blizzard the next day; the train dispatcher who warned trains to stay away as the Mont Blanc burned; the school children who paused during their morning walk to watch the two ships and their slow dance to utter destruction in the minutes following their collision.

But for Barbara Lounder, Robert Bean and Mary Elizabeth Luka, what is also fascinating are the stories that have not been told. For example, that the Mi’kmaq settlement of Turtle Grove on the Dartmouth side of the harbour was obliterated; not even the name exists today. Or that Mulgrave Park is probably the most significant location of the Explosion—ground zero on December 6, 1917—and yet there’s no marker at the site. Or, that the four black women who are pictured in an iconic photograph of the Explosion are unidentified and nameless to history.

“We’re interested in how history shapes the present but also how people in the present shape the future,” says NSCAD Professor Barbara Lounder, principal investigator on a SSHRC (Social Sciences and Humanities Research Council) Connections Grant called Towards Explosion 2017: Perspectives on the Centenary of the Halifax Explosion.

In preparing for the centenary of the Halifax Explosion next year, the three researchers and 20+ collaborators in the group Narratives in Space and Time Society will be holding a two-day symposium at NSCAD’s Port Campus and the Maritime Museum of the Atlantic. Towards Explosion 2017: Perspectives on the Centenary of the Halifax Explosion will be a forum for ideas to shape the official commemorative and public education events of 2017, including communities that have been excluded until now. The symposium for invited participants will be held in October.

Sessions will focus on three major themes: the Halifax Explosion as place; the Explosion as heritage, culture and communication; and living with the legacy of the Explosion. One session will take place on a Halifax tour boat, allowing participants to see significant sites from the water.

“We might also do a little bit of walking,” hints Prof. Lounder, who has made walking part of her artistic practice since 2007. Walking in fact has informed much of the group’s research on the Halifax Explosion, including research walks through Halifax’s former commercial and industrial landscape in the once devastated Richmond (now Mulgrave Park) and along the harbour where Halifax’s main train station was once located. One walk took an entire day, retracing the route taken by Arthur Lismer, then principal of the Victoria School of Art (now NSCAD), from his home in Bedford to Halifax along the railroad tracks. Lismer’s moving sketches of devastation were published in newspapers and seen around the world.

Public walks through the debris field of the Explosion organized by the group on anniversary dates in 2015 and 2014 have attracted more than 100 participants.

“Through walking these landscapes, you get a feel for what it was like and are able to connect very tangibly with history,” she says. “It can be really goose bumpy.”