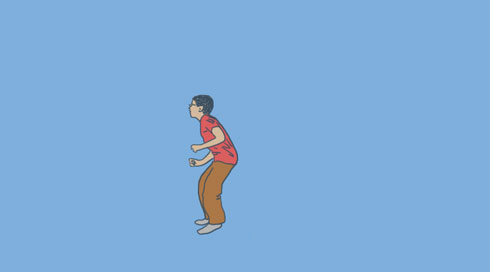 What started as a conversation between friends has evolved into a labour of love for NSCAD regular part-time faculty member Becka Barker.  A member of the Media Art Division at NSCAD Becka is currently working on a film entitled The Evolution of Max.
“My friend Dawn is the mother of two children, they’re twins, and one of them is Max,” said Becka. “Max had done this school project when he was about 10 years old where he had to keep a journal.  His writing was very interesting.  He had a very clear and distinctive voice which is uncommon for a kid so young.”

Dawn approached Becka because she was thinking about trying to publish Max’s journal as a book and asked her if she wanted to do the illustrations. After brainstorming with Dawn about various options Becka came up with the idea that Max’s journal would make great material for an animated short film.

“What was particularly interesting about it was he has this really intense love for evolutionary biology, dinosaurs, and wildlife documentaries and so much of his text is written like he’s writing for a documentary film. So it was already as if he was writing narration for a film,” she said.

“I thought, ‘Oh just as a fun casual project among friends, we’ll just work with them and make some fun little animated films,’ said Becka. “Then as time went on we wanted to make sure that something got made and we took it a little more seriously to come up with something that was finished. At the same point it started to feel like it was becoming my project which they were completely on board with.”

What makes this story even more unique is that Max has autism. He’s high functioning; he’s on par academically with his peers.  He’s a little developmentally delayed, but being autistic is only one part of his identity and Becka plans on exploring that in the film.

“What I love about Max’s journal is that he identifies himself as an autistic monkey sometimes, but the autism in and of itself is not what defines him,” Becka commented.  He does self-identify, he does see it as part of his identity, but it’s only one aspect of his personality among many. I feel like that came through so clearly in his journals.”

For the film Becka will use a form of animation called “rotoscoping”¬ — where you shoot live action footage that you break down into frames.  She will then redraw over the frames to create animation for each frame of live action footage.  What appealed to Becka about rotoscoping was its fluid and natural sense of movement.

“Where Max is describing himself as different animals and a lot of times when he’s outside playing sometimes he will adopt movements that are similar to those animals. He kind of plays around with performing that behavior, so I wanted to capture his natural sense of movement as I could so I felt rotoscoping would be a good way to do that,” said Becka.

Becka’s hope for anybody who sees The Evolution of Max is that it has some kind of impact on people, that they feel something. “I was happy to do this as my project but at the same time respect that it’s really about trying to find a way of honoring his voice, she said.  I hope anybody who sees it finds something in it that is somehow relatable or intriguing or possibly causes them to think a little bit more about their own lives or perspective or world view. It’s kind of what I imagine every artist probably hopes. I just want people to think about how we see each other.”

Last November, Becka was awarded the Helen Hill Animated Joy Award.  This award will help to bring The Evolution of Max to life. The prize provides access to production equipment and support through the Atlantic Filmmakers Co-operative (AFCOOP) and Centre for Art Tapes (CFAT), organizations that are really dear to Becka’s heart.

“It’s the first award I’ve received since moving back to Halifax because I’ve been away for several years. It felt like a homecoming.” Becka has also received a provincial grant and a mid-career Canada Council Media Arts Research and Creation Grant for the film, which will take about a year to finish.

The award named after former NSCAD faculty member and experimental animator Helen Hill, who tragically passed away in 2007, means a lot to Becka both personally and professionally.

“It was bittersweet because the last time I lived in Halifax I lived with Helen,” she said. “She was my mentor, my teacher and super dear friend. I’m glad the award was there and I was glad to receive it and the spirit of that particular award.”

As well as The Evolution of Max, Becka is working on a new animation-based video installation, The Hundred-Eyed Satellite, at the Museum of Natural History for this year’s Nocturne festival.