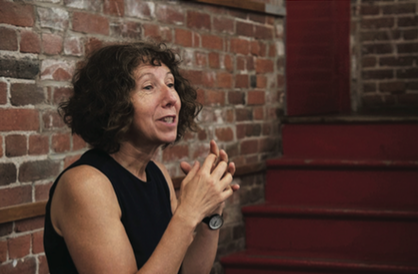 By Christopher Kaltenbach. Reproduced with permission.

Recently on a US talk show Salman Rushdie was asked if the current administration had had a negative impact on his day-to-day life. He replied, “I feel now about my writing a little differently, because you have got so much fiction, so much fantasy, so much distortion and untruth propagated every day that I think, ‘Maybe not magic realism.’ Maybe it becomes the writer’s job, paradoxically, the fiction writer’s job, to try to re-establish the sense of the truth.”

Like Rushdie, Anthony Dunne and Fiona Raby’s design practice exists within their own kind of magical realism. Rather than being positioned in historical fiction as Rushdie is, theirs is in a supernatural, future fiction. Crafting imaginary, aesthetically seductive, one-off consumer electronic, product and spatial design propositions, they provoke and question the very nature of truth and reality.

For many designers, truth lies in whether or not the thing designed is commercially viable. If no market exists to support the production and sale of such a thing, then the perceived truth in its value cannot be measured – truth is synonymous with commercial viability.

In the work of Dunne and Raby, truth is the quality in the ‘make-believe’, not in the ‘suspension of disbelief’. One is never asked to circumvent critical faculties to be fooled, but rather the practice offers an invitation to dream, speculate and engage one’s full imagination. It is a quality measured by how rich a fictional reality can be constructed from it.

This mode of exchange resides outside of traditional capitalist systems of value; if anything, it more often is a critique of those systems.

Furthermore, value is assigned to the contemporary and historical residues left behind by the amplification or misstep in behaviour created by negotiating new technology. Its assessment is based on where those relics sit within its unique curatorial lens.

Truth and the critique of it extends even into the physicality and materiality of its projects as seen
in Not Here Not Now, the 2014-15 project originally commissioned for the Future Fictions exhibition at the Z33 House for Contemporary Art in Hasselt, Belgium.

For this project Dunne and Raby designed a series of products exploring ideas about the values societies hold as important: who controls values, how does design communicate values, and what role do economics and digital worlds play in creating and reflecting values?

One product, the head mounted Publi-Voice, imagines the future of AI in relation to mediated communication. Illustrated via a photorealistic montage at an isometric view, an individual wears a pink, translucent object that is mounted on her shoulders and covers the entire head. The user speaks through the gadget and it calculates the possible effects of the words in future events before they are released to be heard by others. 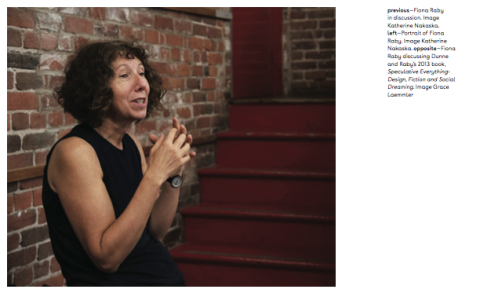 careless casualness of public discourse, it playfully questions, as Raby points out, “how much will we outsource our decision-making to a technological system… to relinquish our responsibility is a huge relief… allowing the computer to make the decisions”.

The ambiguity generated in the two-dimensional representations of the device is critical to the investigation, Raby asserts, “How much do we have to materialise? How real do our designs need to be? It could be an invisible electromagnetic field, a hyper light material…”

The ghost-like quality of the objects, representing a state of ethereality and agency, is part of a broader aesthetic position that has defined their work over the last 20 years. This is epitomised by remarks from the user of their 2001 Placebo project, Nipple chair: “Can something be a gadget and aesthetic as well? Can the gadget-y thing that it does be more aesthetic then the object itself?”

This project along with the practice’s broader body of extraordinary work has become synonymous with the Royal College of Art (RCA) in London, where they taught for over two decades. The book Speculative Everything from 2013 is a culmination
of that work and projects developed by Dunne and Raby’s students. It has since been translated and printed in Russian and Japanese, and is currently being translated into Mandarin.

What was a European design research initiative is now a packaged manual shippable across the globe. Beyond their ideas in print, they too arenow transplanted into another context, just across the pond – the centre of pragmatism and zombie capitalism. Having left the RCA, their practice is now based in The New School, as in 2016 they were offered joint faculty positions at both The New School for Design (Parsons) and at The New School for Social Research in Manhattan.

Their migration to the north-eastern US has made them more accessible to North American audiences. Recently, Raby accepted an invitation by the renowned art school, Nova Scotia College of Art and Design (NSCAD University, pronounced: nas cad) to speak to an audience in Halifax, Canada.2 During the 1960s and 70s NSCAD was a hot bed of contemporary art and such conceptual artists as Vito Acconci, Joseph Beuys and Sol LeWitt visited and made art at the school.

Raby privately remarked during her visit that it was good to be at an art school again. One could not help but wonder what truths or values were missing within her current reality in the Big Apple. Dunne and Raby’s fantastical furniture, robots, driverless vehicles and general gadget wizardry have always appeared to be uniquely European, questioning and promoting values inherent in the understated wit of British society. Within their new cultural and political context, how will their adopted country affect their practice? Can Dunne and Raby help reaffirm the necessity for critical fiction that provides truth
about our common human frailty in the face of ever- growing, invasive technological discoveries?